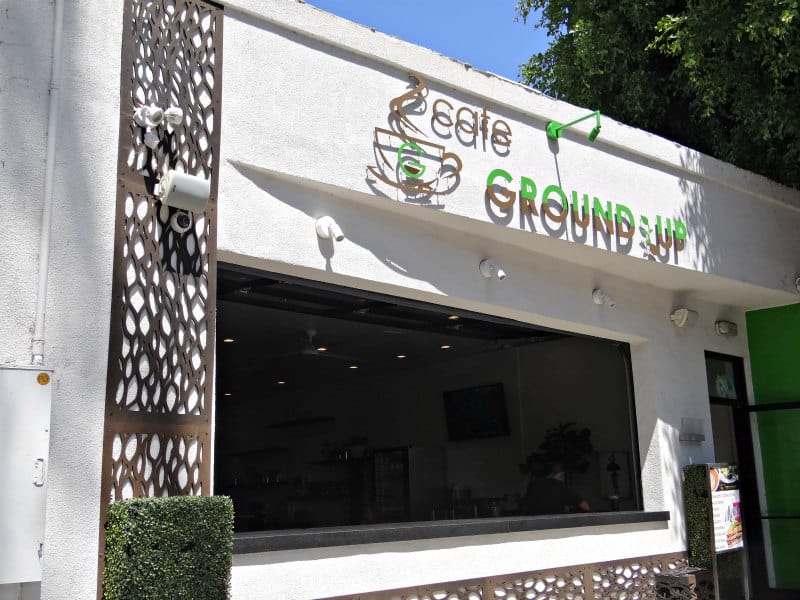 Carlsbad Village has another public art work in the downtown area, on the west wall of the Cafe Ground Up, a very cool Italian-style coffee place at 550 Grand Avenue between State Street and Roosevelt.

Bryan Snyder, the creator of the well-known Carlsbad Art Wall (links to the most recent wall mural by Bryan himself!) at Senor Grubby’s on Carlsbad Village Drive, has recently completed a 3D, interactive art creation called “Doodle’s Umbrella.”

Doodle is a creation from Bryan’s childhood, and his signature character – you no doubt may have seen him elsewhere, including the Super Donut Shop on the corner of Grand Avenue and Roosevelt.

The cool thing is that the project is 3D, with the umbrella and flower pots attached to the wall. And the interactive part is even better – stop by the Cafe Ground Up to get one of the watering cans painted by Bryan, fill it with water, and you can water either or both of the 2 flower pots.

It was a beautiful sunny day so I couldn’t avoid getting that shadow on the wall…but it makes me think of rain. LOL.

Check it out next time you are in the Village, and stop in at the Cafe Ground Up, too!!